Look at the fun Adam Glendon Sidwell has been cooking up this fine May! 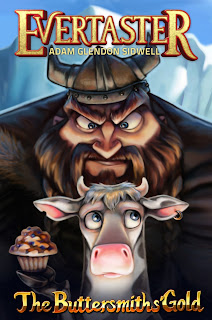 The Buttersmiths' Gold
BATTLES. BLUEBERRIES. BOVINES.
TORBJORN AND STORFJELL’S HISTORY UNFOLDS IN AN EPIC EVERTASTER NOVELLA.
Everyone knows the most coveted treasure of the Viking Age was blueberry muffins. Blueberry muffins so succulent that if you sniffed just a whiff, you'd want a whole bite. If you bit a bite, you'd want a batch; if you snatched a batch, you'd stop at nothing short of going to war just to claim them all.
Young Torbjorn Trofastsonn comes from the clan that makes them. He's a Viking through and through– he's thirteen winters old, larger than most respectable rocks, and most of all, a Buttersmith. That's what he thinks anyway, until a charismatic merchant makes Torbjorn question his place among the muffin-makers. When Torbjorn lets the secret of his clan's muffin recipe slip, he calls doom and destruction down upon his peaceful village and forces his brother Storfjell and his clansmen to do the one thing they are ill-prepared to do: battle for their lives.

Sounds like fun, doesn't it? Here's your chance to win a signed copy Buttersmiths' Gold and a $50 Amazon gift card!
a Rafflecopter giveaway