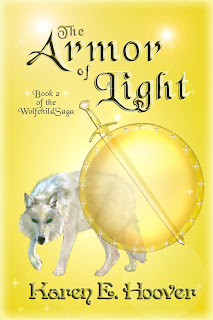 
Ember has been accepted into the mage academy, but not without cost. She has gained a new enemy, ancient and dark, whose entire purpose is to destroy all white magic and her along with it. After nearly losing her life in a brutal attack, DeMunth is assigned her guardian, and the keystone he wears, The Armor of Light, begins the transition that will make it a true power.

Kayla has lost most everything of importance to her—the people, the prestige, and all she fought for the past ten years. With nothing left to lose, she continues her search for the birthplace of The Sapphire Flute and the Wolfchild she believes to be its player. Her journey will take her to strange, foreign, and often dangerous places, and everything she had thought to be true will be proven wrong.

In a showdown full of betrayal and heroic loss, Ember and Kayla finally meet on the battlefield, fighting a war on two fronts—against C'Tan and her people, and the mysterious enemy bent on destroying all magic—the shadow weavers.

The story is full of power, betrayal, hope, and love. The elements of the universe are coming together, and none can know who will stand in the end.

It's always fun to continue the adventure from the first book. I was really interested in learning how Ember faces her challenge to learn the art of white magic when she is the only one of her kind who knows how to use it while C'Tan seeks her out--either as a cohort or in death. Kayla faces equal danger as she fights to protect the flute from groping hands that mean her ill. As Kayla and Ember wondered through their respective pathways at the start, I found the story to slow down a bit. Hoover, however, weaves shocking surprises, and throws in an exciting love triangle as well. The world is colorful and characters well-rounded.

Read the The Armor of Light's first two chapters here!
Visit Karen E. Hoover here, and purchase the book here.
written by Elizabeth Mueller at 12:00 AM

Email ThisBlogThis!Share to TwitterShare to FacebookShare to Pinterest
Labels: book review, The Armor of Light; Book 2 of the Wolfchild Saga