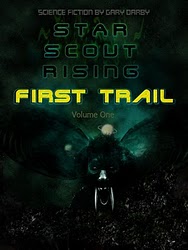 It's been years since I've read anything science fiction, and only a few books before that, too. But after reading Star Scout Rising, I realize that I've been missing out.

Star Scout Del has a secret that could destroy him, but he keeps it well hidden as he trains as a peaceful protector with his team of 5. Fate hurls them into the hands of danger and the horrifying beauty of other worlds. Del faces the perils that test his Star Scout creed. Will he remain faithful to his beliefs?

Darby's world building is vivid, fantastic and rich; I was drawn into the thick of it. He can really spin gripping scenes; I cheated, and skipped ahead to see if my favorite characters survived! He is masterful at body language—a small description that reveals a great deal without weighing it down.


The story starts out with a lot of detailed flashbacks and inner thoughts. Sometimes the dialogue between two characters felt like narrative lecture. Because of these factors, I was either lost or sidetracked until I picked up on the thread of the story. I'm fairly new to this genre, so it's probably just me. Grammatical discrepancies drew me out of the story here and there, but didn't ruin the fun.

The ending has a pleasant surprise! Darby is a wonderful story weaver. I enjoyed the wild ride!
I most definitely will pay more attention to the science fiction genre because of Gary Darby. Thank you, Gary.