My dear fellow Crusaders and all bloggie friends:

I am SO glad to have this chance to have your ear. I have this *very important message from David Farland: 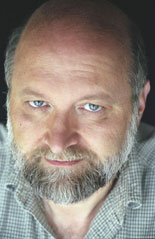 As I’ve been forecasting since last April, we’ve seen some huge changes in the publishing industry this year.

In the latest news, Borders has filed for bankruptcy here in the United States. Borders of course is the second largest bookstore chain in the United States, but they failed miserably at keeping touch with the changing times. The mistake? They didn’t respond to the online threat from Amazon.com, and they didn’t put together a program to sell electronic books.

As a result, in the fourth quarter of last year, the busiest season for bookstores, Borders group saw sales drop by a whopping 18 percent. So they’re filing for bankruptcy and will be selling about 200-250 stores. Since Borders stores are built, usually, near a Barnes and Noble, one must assume that customers will migrate to the competition.

Meanwhile, Borders doesn’t seem to have a viable plan to stay in business. Instead, some goofball decided to help wannabe authors self-publish their books electronically through a program called BookBrewer. Stay away from Borders’ stock, and stay away from their self-publishing model. Both are poison, in my opinion, and I’m not the only one to think that dealing with them is gonzo.

Borders has a plan to restructure which will pay only about 20 cents on the dollar to its debtors. This is going to hurt a lot of publishers and distributors—to the point that Ingrams, the nation’s largest book distribution company, has ceased providing them with books.

In short, we’re seeing the dinosaurs all die off. Those businessmen who haven’t adjusted to the way that books are being sold will soon be gone. Whether they’re small private bookstores, major chains, book distribution companies, or publishers, those who don’t adjust will die.

Meanwhile, many publishers are actually showing higher profits right now. With electronic book sales up by 118% for the last year, publishers that take a chunk of electronic rights are actually seeing higher revenues with less in costs, thus increasing their profit margins. So the publishers are healthy. Barnes and Noble is feeling giddy over its sales of e-readers and the accompanying surge in electronic sales. Simon and Schuster, along with a number of other publishers, are seeing a big rise in profitability.

But this leads to a new problem for authors. Those same publishers are finding that the hardcover book market for bestsellers is shrinking. Many of the most active readers, the people who read ten or twenty novels per year, are now reading them on Kindles or iPads. As a result, some authors who were selling three hundred thousand copies in hardcover are finding that more than half of their sales are now made electronically—and that under current contracts, the publishers actually get to keep a larger percent of the author’s income. Thus, an author who might have made a million dollars on a novel last year is finding that he’s losing a couple hundred thousand dollars of that money to the publishers this year.

So now we’re coming to the next big battle. How much of the money on a new release should go to the author? I think that we’ll see some heavy contention—with agents and writers groups lining up to battle the publishers this coming year.

The real battle, perhaps, might re-shape the industry. The argument should be whether “electronic publishing” is really “publishing” at all. Under old-fashioned copyright law, when a publisher buys the right to publish a novel, he’s buying the right to make a physical copy and distribute it.

But with electronic publishing, there is no physical book being created and shipped. The book exists only as an electronic file, in the same way that music files are being downloaded and sold. So the question arises: is the selling of electronic copies in violation with the intent of the copyright law?

At least one judge has ruled that “electronic publishing” should be handled as “electronic licensing.” There is a huge distinction here as far as the author is concerned.

For example, a publisher in today’s world can publish your book, and then hold onto it indefinitely by claiming that he’s still publishing it electronically a hundred years from now, even though he has no other interest in it. The rights to the property would never revert, and the old contracts that are in the books in some cases give very little of the money from those sales to the authors. It creates a perpetual windfall for the publishers, and makes the writer wish that he’d never published the books in the first place.

So authors under the current system basically handle control of their work over to publishers for eternity. Savvy authors don’t want to do that, and if you understand that we see the emergence of a major new market over the next few years, where the control of electronic rights are all-important, it makes you as an author wonder if publishing a book right now is ultimately a mistake. In the long run, an author might make far more by self-publishing his works electronically.

A year ago I would have told you that you should stick with the traditional publishing route. Right now, as we move into a new age, I’m still going to tell you to stick with the traditional route. But here’s the thing: self-publishing electronically looks like a better alternative every day, even to someone like me who is a New York Times bestseller.

So when do you give up on the old system? So much depends upon you as an author. I’m an old guy in my fifties. For me, the old system still makes a lot of sense. But if I were eighteen or twenty, and I was looking at giving up thirty percent of my income on a book for life, just to have it published by some sloppy New York Publishing company that probably wouldn’t do anything to push my books anyway, I’d be giving New York the evil eye right about now.

Think about it: is an extra $20,000 in your pocket right now worth a loss of 30% in income on the sales of your book for the next fifty years? That’s the gamble you’re taking on publishing, and increasingly new authors are saying “No. I’m not getting enough of a push from existing publishers to make up for the long-term losses.” They may be right.

What are  your thoughts?

*this has been reposted with permission by the author
written by Elizabeth Mueller at 12:00 AM