Meet My Character – the Lykora!

After about the seventh draft of what was once my first book and now has become both Promise and Purpose, I decided I needed an animal. But it couldn’t be just any animal. It needed to be the epitome of protection, loyalty and fierceness. So, as we writers do, I went on the hunt on the Internet. I didn’t find exactly what I was looking for.

No one particular animal embodied these three characteristics in the absolute way I needed them to. Then I realized, hey, I’m writing a fantasy…guess what that means? I can make something up and get away with it! So I did.

I took the two animals that came closest to exhibiting the qualities I needed (as well as the added bonus that they’re both beautiful creatures) – the wolf and the tiger – and combined them. Then I added wings, because, one, I think it should be able to fly, and two, it’s a gift from the angels, so they gave it wings.

Then I needed to name it. This took even more research, but what I decided in the end combined the two animals again. Lykos, lykin, lyka, etc., are variations of the word “wolf” in several languages, mostly Latin based. And tora means tiger in Japanese. The result: 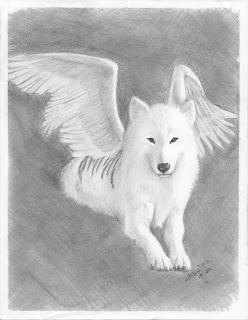 The Lykora doesn’t really make a physical appearance in either of these first two books. It’s described in Promise, though, as a beautiful creature small enough to fit in the palm of your hand, extremely loyal and when it feels its master or loved ones are in danger, it will grow as big as it needs to be and will fight to the death. I think it will actually become a character with a real role in a future book – maybe book three or four.

For the longest time, I’d always wanted to know what this strange creature would actually look like. No one I knew with any artistic talent was able to put the image together...some didn’t even want to try! Then I won a contest at The Alliterative Allomorph and my prize was the above drawing by our own Elizabeth! I bubbled over with excitement to finally be able to see a real picture of my Lykora. And when I saw Elizabeth’s sketch… Wow! Beautiful! Isn’t she amazingly talented?

Thank you, Elizabeth, for a beautiful rendition of my Lykora. As well as for letting me take over your blog today. I bow to your artistic talent…and know who to come to next time. Bwahaha!

Thank you, Kristie, for the nice compliments and for sharing your wonderful writerly sanctum with us! It was way fun getting to know you.

Go visit her blog and get to know her better! :)