Invasion of the Bloggy Snatchers! 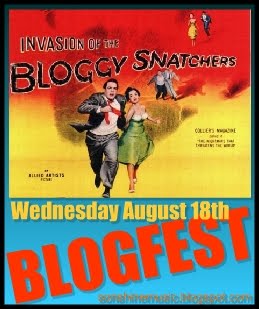 The most cute and creative Rebecca Thompson has whipped up something fun and oh so irresistible! (Please go visit the other entries!) I find myself rubbing my hands together, a wicked grin on my face as I do my mad scientist laugh!


That one turns out to be the best mad scientist laugh I could find. ;)

The rules are (and I quote):

I've decided to feature Rock Star (my YA contemporary novel) at an intense scene. Here, Moggie is furious with a band member (Mirah) for dumping a bucket of beer on him while he was messing around with a few groupies on the floor of her suite at a hotel after their last showing of the tour.

"Mirah!" he howled over his stinging punches. The wood cracked. "Open this door, now!" Her muffled laughter boiled him. When blood itched his arms, he used his elbows. Lightning darts twanged his nerves. He swore. If only he had his boots--the balls of his feet just as useless. Who cared how stupid he looked in his clinging boxers. Or how his hair plastered his neck. Or how fierce he got in his frenzied rage.

A pretty girl poked her head from around the bend. Her dark hair flowing like black silk. Moggie gazed at her, but his anger won.

“I swear, I’m going to get you,”—he kicked and pummeled the door—“once I bust this open!” He had to get in and didn’t care how. He staggered off, in frantic search of something sharp.

"Moggie?" The dark-haired girl said, her voice like music in a sweet dream.

He stopped in his tracks and whirled around, his face confused. "You are not a groupie or a lovee."

"My name is Rachna. Why are you so mad?"

Moggie rolled his eyes and shook his head. "I've had enough of that thing in there." He jabbed his finger toward the closed door.

The rock star tensed, not caring to empathize with Mirah one bit. "I'm looking for--," but his sentence dropped when he saw it. There! Beside the useless fireplace, was his promising weapon.

He dashed away, rammed into giggling groupies who streaked after Block, and swore. “Outta my way!” A slithery grin then split his face. Two pokers . . . even better. They were heavy and cold and deadly.

"What the--!" Moggie dropped the pokers and rubbed his eyes.

A soft giggle tickled the noisy air. A pretty girl held a camera in her dainty hands.

"Whatcha doin here?" he roared, marching toward her.

"Well," she tossed her hair from her eyes and smiled bright, "I invited myself." She punched her hand out toward him to shake his. "My name is Tessa Conte, as in con-tay."

"Whatever," Moggie snapped. He pushed passed her, hefting the pokers.

How he loved the feel of the weapons. Invincible. Euphoric. Powerful. A quivering rush flooded his muscles. He hurried to Mirah’s door and wedged a bar into the jamb. And pried. The gold molding ripped with a splintered crack. His laughter boomed—a horrible and wild sound. He strained until the fury gave way with a loud groan.

"Me-ow!" The sharp cry startled him. He whirled around. A black and white cat curled around his ankles. He lifted his foot, ready to punt the thing across the room.

"Oh, I dare you to do that," a honeyed voice rose from behind.

Moggie closed his eyes and breathed in sharp, stilling his nerves. All he wanted to do was get in there and show Mirah a thing or two. "Or what, lady?" he shouted.

"Hippie? Look lady," he charged toward her, the pokers in hand not frightening her.

Moggie roared and stomped and writhed. A tantrum of a toddler. "What's with you people? I didn't invite anyone else but my groupies and lovees here."

Old Kitty sniffed. "Come, dear Charlie. We do not need this abuse from a spoiled American."

His fitful dance halted with those words, fire in his gaze.

But the sound of the door creaking open snared his attention. Forgetting the lady and her cat, he twisted around. He admired the havoc he reeked upon the door with his bars. The handle sagged like a worthless eyeball from its hole.

Then he remembered his beer soaking clothes and hair. Heat coiled up his throat and exploded with a shout, his foot through the door. It bounced off the wall, stopped with his bar, and shattered in half. He twirled the pokers like handguns in the Old West. High on the murky loft perched Mirah. His temples throbbed. He stomped forward, blinded by ripples of anger.

"Uh, excuse me?" a strong booming voice cut through his patience.

"That wasn't right." The man blinked one eye and gazed at the ceiling, his fingers in his whiskers with thought.

"What?" the rock star felt his hands trembling, his knuckles aching as he gripped the pokers.

"No," his chuckle grated Moggie's last nerve. "No, it isn't what, but how. It is how you said it. It isn't right. It isn't proper to say, 'I don't want you no more.' You say it like this," the man's eyes sparkled as he straightened his already erect back. "'I don't want you any more.' On top of that," the man reached through the computer screen and ripped the manuscript from Elizabeth Mueller, "the author has too many incomplete sentences, short sentences, I actually got lost in the words she used."

He smiled, shaking the manuscript under Moggie's incredulous face. "Sorry, I can't help it, my hands itch every time I come across something that needs to be edited. Look, you can even see the hives forming."

"Andrew, my dear fellow, Andrew's the name." He smiled, turned around and faded off the stage. A skip in his gait.

There you go! LOL. I had so much fun writing that. I hope you enjoyed it! Don't forget to read the other fun entries!

Thank you, Rebecca, for hosting this fun Fest! ;)

PS--I don't know how other bloggie friends put a "continue reading" link so that the post looks short. So I cheated and did it a weird different way. Click here if you'd like to read the original version!

Email ThisBlogThis!Share to TwitterShare to FacebookShare to Pinterest
Labels: Invasion of the Bloggie Snatchers by Rebecca Thompson