Thank you, all you brave souls, who joined my blogfest. I know this wasn't an easy one because none of us likes to show off the knots and tangles and dangling strings behind our beautiful piece of tapestry. You guys will always have a special place in my heart. ;)

Please don't forget to read the others' wonderful excerpts! (I will announce the winner Sunday for my bribe!)

The excerpt that I entered is high fantasy, Tragic Innocence, my very first novel. I found, as I read, that I loved adverbs and purple prose. I've grown since, cleaning out adverbs from my 'dictionary', but I still lean to the purply shades of beautiful prose. *Sigh* What can I say? I'm a poet at heart!

“Wait for me!” Sinot called out to Mikash, who made it appear rather simple to clamber up steep mountain-sides.

The dark blue of the gloaming yawned vastly above them as the early morning stars twinkled happily. The fatigued sun (known as Enon) struggled from its much enjoyed slumber behind . Thick pink puffs of clouds lazily drifted by, covering up the breath-taking color of the dawn that could have otherwise been visible. It had just rained, as the moist ground and fresh, life-invigorating air testified omnipotently around them.

The cool breeze felt good as it rushed upward against the cliff. Dusky forests grew thickly below and above them. Only a few trees braved the awkward slant of the barren crag. An early forenoon fog lingered quietly, as it whitened the black forests 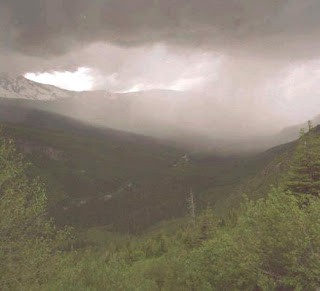 ominously. But the birds had paid it no mind, twittering merrily about.

These were the type of mornings that Mikash lived for: overcast with the stimulating scent of rain lingering in a gentle breeze. He paused as he quickly hurled a glance over his shoulder below at his redheaded friend. Sinot was definitely too laggard, for he did not like climbing very much--due to his slight fear of heights. In fact, his old-time friend would rather go the long way around. “Where my feet would never have to leave the sturdy ground,” as Sinot had once put it. Mikash grinned as he shook his head, now concentrating on the task at hand.

Mikash’s long sable hair whipped around him like the dancing fire at a camp as he easily ascended. He enjoyed using his elfdagger as an aid for his climbing, stabbing it deeply into the dirt and rock.

Sinot’s heavy black cape flew up from behind him. He mumbled under his breath, disgusted at his friend’s natural talent. He glimpsed upwards shaking his head to himself as his violet eyes glinted with what little light shined. “Just how do you do it?”

Mikash laughed heartily. “You do have a great sense of humor!” He smiled broadly. He hesitated as he decided to search for a good resting spot, so his good friend can catch up. When he then spotted a gnarly tree just above, he set out for it. It projected away from the steep angle of the cliff, its branches twisted and knotted from centuries of seeking comfort and life-giving light from the Enon. He nestled comfortably within the heart of it, waiting for his confidant to catch up. “How is it going?!” Mikash called out as his voice echoed in the morning’s distance. A smirk tilted one corner of his lips.

Sinot glared upwards and noticed that his friend had decided to roost in the tree--the very same tree that Mikash would always wait in when he took too long--with his long legs propped up comfortably, with a flute in his hands. “Do you still remember how to play that?” Sinot bellowed conversationally with absolutely no intention of hearing a reply. His echoes greeted him in return. His attention was elsewhere, focused on pure concentration.

And Mikash knew it, but he answered anyway. “Yes,” he licked his lips in preparation, “my mother taught me well.” His eyes were far away with thought. Today was his beloved father’s anniversary, so he made a special trek out to pay him a visit.

The amulet Mikash wore was expressly given to him by his father at birth, for safekeeping. It was a peculiar jewel, he had to admit. Strangely enough, why did it invariably glow with each sojourn to his father’s? His startling gray eyes shimmered as long lashes glinted from the rising of Enon. He raised his eyes to the horizon to prevent the tears from falling. The Enon was still dull enough to look straight into it’s heart without burning pain.

Thank you for reading and leaving comments, I really appreciate it! Dont forget to read the other's there on my side bar to your right. They are confident writers, see how they aren't afraid to show off their first stages of writing?? ;) Share your thoughts on how your work started out, too!


photo found here
written by Elizabeth Mueller at 12:00 AM