You can still enter my contest! Okay onto the Blogfest! :) 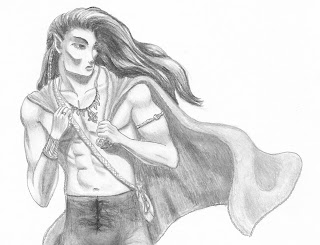 Jessica from The Alliterative Allomorph is holding the illusive internal conflict Blogfest. I invite you to go to her blog and visit her side bar where the list of other Internal Conflict Writers have participated! ;)

This should be fun! Muahahahah! >D

This is my very first baby, Tragic Innocence, high fantasy. *Cooing* I started it out once upon a time when I was 17 years old. This is in its 4th-draft-before-I-learned-about-adverbs-and-adjectives state. In its purple prosey full glory. *Sigh* The good old days of ignorant bliss.

Spring Brook is a sprite and very much in love with Crow, an elf warrior. She is showing a certain emotion toward Crow's unexpected guest, Pentulla. Can you guess what Spring Brook is feeling?

Spring Brook began to quake with unspeakable jealousy as she sneered with criticism the beauty of the fair maiden. She was too pale for her liking. Her hair was too flaxen to the point that its under-hue shown too blue. As for her eyes, well, they were much too large for such a small face! Her chin was too pointed and her nose too long and narrow!

Spring Brook felt her chest rattling against her trembling palm that rested heavily against it. “Crow is mighty foolish for bringing in such fluff into my home! How dare he, how dare he!” Her voice rumbled deeply like an angry animal ready to pounce.

The maiden’s lashes lowered and Spring Brook followed her gaze to the hands that clasped a small leather pouch. Spring Brook’s heart stopped. The pouch was Crow’s. Her brows slashed downward with livid confusion. Who is this stranger and why did she possess something that belonged to Spring Brook’s beloved Crow? Answers, answers must be had!

A slight movement pulled Spring Brook’s attention as she recognized it as Crow’s hand. It barely skimmed the arm of the mysterious maiden, then lifted and dropped back down, nearly patting the small pouch within the nestling grasp of the accursed wench.

Spring Brook could feel her hackles rising and the many hairs upon her body bristle. She bared her teeth and clenched her hands into white-knuckled fists. “Oh no you don’t!” she hissed, holding herself back with such violence that her entire body began to tremble.

Spring Brook craned her neck a 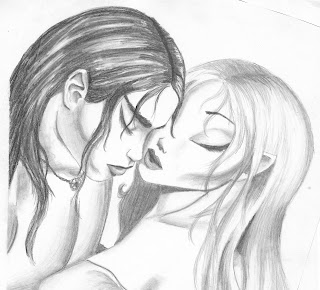 little further until she could make out Crow’s face by half. A wrinkly smile tickled the corners of his lips and an unfamiliar spark lit his brown eyes. She seethed with blooming resentment. Where had he been these past few fortnights only to come back bearing a stranger into this peaceful home?

Spring Brook hurled herself back into the enveloping darkness of the corridor and stilled her throbbing heart. How could Crow do this to her? She could feel her world crashing down all around her and the thought of being replaced made her angry. Did Crow find her somewhere and did his heart take pity upon her shabbiness? Was that the reason why he had dragged home the stray? A stray, came the thought as sharp as a piercing arrow. Was that what he thought of Spring Brook? Because I was on the brink of starvation when my valiant warrior came across--Spring Brook shook her head. What was she thinking of to be comparing herself to this homeless vagabond that now sat primly across from Spring Brook?

Crow’s soft laughter filtered into her steaming ears as she jerked back around the corner once more. This time his eyes were dancing as he reached out to grab for the nymph’s hand.

“Oh no you don’t!” Spring Brook bit her lip until she tasted blood.
"

I hope you enjoyed this excerpt. Your thoughts are always welcome! ;)
written by Elizabeth Mueller at 12:00 AM