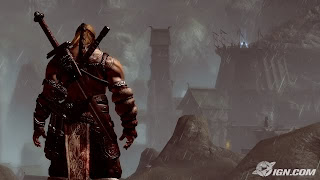 Harley D. Palmer from Labotomy of a Writer is holding the most thought-provoking blogfest I've ever encountered.

I pored over every one of my MSs trying to find a scene with the most body language with NO dialogue, and NO internalization. The visceral reactions? Well, we could easily see that through body language, right?

Here it is, an excerpt from my one of my WIPs. Chengral--a story where a ruthless warrior is sent by his queen from another world to destroy their ancestral colony taking place in the Viking Age.

Airk squeaked and darted behind Halla as she rose to her feet, giving Chengral her back. A feeble attempt to protect him. She clutched the child behind her.

A wave of heat rushed through Chengral. That face. He remembered them among his attackers.

The man spoke swift words, reaching around Halla for the little child. Airk screamed, and struggled against the clutching hand.

Chengral whipped his tail and flexed his wings with a snarl, the binds strong and fast and cruel. The brutal desire to defend both woman and child burned. He trembled, furious thoughts ceasing his heart into stillness. His hands and legs bound, injuries acute. Being a fierce warrior in his queen’s regiments meant nothing. Nothing if he could not shield the innocent from injury.

Halla screamed at the man. She beat his chest, fighting to pry Airk away as he dragged the child toward Chengral. A distorted expression. The man bent over, and spat into Chengral’s face. Three sharp blows left him gasping.

The man watched him, laughing hard and deep and long.

Airk yanked at its arm, but could not free itself. It wailed and kicked as the man whirled around and dragged the little child away. Halla shrieked and bent down as she tried to lift her child from the dirt, but the man kicked her face.

She stumbled with a grunt. Airk bawled, reaching out little hands.

It was if the steam from his world had vented inside his skull. Searing. Deadly. Dangerous. Chengral roared. He battled against the binds despite the anguish he faced. He remembered how Halla had screamed out in terror for her Airk as the child clung powerlessly from the cliff’s ledge.

Fear and desperation and urgency clutched him, but the restraints refused.

The man flung Airk away and marched to Chengral. His face contorted with rage. Halla staggered after the child.

Chengral ground his teeth and raised burning eyes. His body searing from every wound. He braced himself for another kick.

The man reached behind his cape and pulled out a crossbow. A grin slid over his face. Amused. Cruel. Twisted. He lifted the weapon, the sharp point to Chengral’s eyes.

Halla cried out and hurled herself into the man. The arrow whistled into Chengral’s shoulder. He howled as he saw the two crumple.

Airk wailed, and darted to Chengral. His little hands unable to uproot the arrow from his shoulder. Chengral growled, and braced himself from the pain. The strain of his distress forced the wound in his ribs to cascade blood over his arm.

He gaped at it, remembering that the natives had red blood while he had black.

There you go! I hope you had fun reading it!
This is how I envisioned Chengral--->
Should he have a tail? I realized that I didn't put one on him
in the MS like I did when I edited this excerpt for the blogfest!