In honor of Mireyah Wolfe's Fight Scene BlogFest! (Here's one for you, David!) 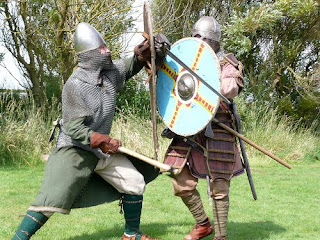 (it is in its first draft, please forgive the errors!) I hope you enjoy reading it. *Crossing fingers!

“Chengral!” Halla cried out, writhing against the binds, her body exposed withing the warmth of the ember’s glow.

Chengral reached to her and was about to adjust her ripped clothing when he heard the heated shouts behind him.

“Look out!” Halla screamed. Two men flashed their swords and charged, their mouths wide with roars. “Chengral!” Halla shrieked. She dropped her head down and away, shrinking.

Chengral covered her with his body and blocked the attack with his arm, metal connecting bone. He howled, but lifted his leg at the same time. The movement a mere flash that sent the assailant several lengths away. The man barely cleared the fire pit.

The other man lunged, the point of his sword sinking into Chengral’s back. He snarled from the blazing agony. He was at a disadvantage—his other hand bound and, still, he possessed no weapon. Again, the man stabbed him and leaped away from Chengral’s mighty kicks.

Halla shouted to the man and he shook his head and yelled back at her. She jutted her chin and spat on the ground at him, her magnificent eyes on fire.

Chengral turned from Halla, gauging the man as he shifted with many small steps closer to them, his sword lifting. Chengral closed his eyes and listened to him. His breath, his proximity, his technique. Then he opened his eyes and lifted his foot from the ground, a graceful arc in the air. The man dodged it, leering as he swung his sword. Chengral found leverage in the momentum of his swinging leg and lifted his body into the air, his other leg lashing out.

With the powerful impact of Chengral’s secondary kick to his sword arm's unprotected shoulder, the man shrieked. The sword flew from his grasp—barely grazing Chengral’s first leg. The man spun in the air several times and crashed against the large stones surrounding the fire pit.

Chengral landed with his feet planted firmly in the soil, now facing Halla whose eyes were wide and worshipful. Her eyes swam with crowding tears as they held his, her mouth parted and body trembling. Her chest rose up and down with her violent breaths and she dropped her head against his chest, sobs coming loud and fast.

He pressed her head against him and kissed the top of her head.

written by Elizabeth Mueller at 3:53 PM