I am a Rock Star! 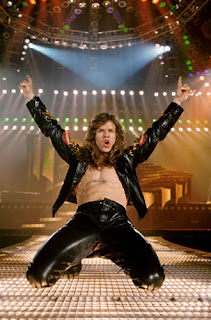 Thanks for visiting me! I always enjoy the wonderful faces of my followers and when my fans drop me a thought or two--it makes me feel like I am doing my job right.

What is this all about? It is in honor of my WIP. I am revising, editing, hacking my own Frankenstein! Woohoo! But his name is Rock Star. He is a YA worthy romance.

I have to pretend to be a rock star as I write/rewrite (it's so fun to revisit my beloved characters!) and be dismissive with my other characters. I need to be laid back. Vulger. Selfish.*

I have done some performances and can draw on some of the euphoria of people applauding and adoring me. Imagine living a life where people would do just about anything to see you? It is a heady sensation. ;) (At least that is what my MC can tell you.)

I used my lovely hubby as my source of info to write this story. He is a fan of Motley Crew, Metallica, Def Leppard, White Lion, White Snake, Poison, Winger, Hinder, Theory of a Dead man, Cinderella, Bon Jovi, ... and when he was a young 'un, he went to many a concert.

I am embarking on a tour to discover what it is like to be a big-time rock star. From the drugs to the groupies to the performances. I need to stop picking my hubby's brain. (I'll post about this another time.)

Here is an excerpt from my newly rewritten portion. ENJOY!

Moggie opened his eyes and said with a husky tone, “You know this tune. Our first song right after the accident. An accident that steals hope from children.” He swung his hair from his eyes and scanned his fans. They waited. He clamped his lips together before he could force himself to say the next words, his throat tight. “But I give it back . . .”

The audience roared in reply.

He sniffed and dove into the measures, his fingers moving quickly across the strings. The crowd approved and cheered into a crescendo of howls, washing the music away, until they tapered into scattered cheers and whoops and whistles.

Moggie clung to his instrument as if afraid it would vanish right before his watch, his hair dripping with sweat. He could hardly contain his weeping as he listened to the doleful notes of Zag’s lead guitar twining with his. Their sound rose and fell, glided and tumbled, growing strong and weakening before he would speak the words . . .

The words of Zag’s first written song ever. It had pulled them out of the one hit wonder era. Moggie shut his eyes against the dancing lights and lowered his chin. He could feel the solid comfort of the floor beneath his knees, the glowing energy of his fans and the living beast called music. He opened his mouth. The sound of his voice flowed, reminding him of the lost notes of a flute in the forest. He nodded and swayed, his brows pulled low. The tears finally fell from his chin and slid down his neck.

This song was composed after the fire, but never sung until he and Zag felt comfortable enough to share it. With the urging of their band in those days, it had taken Zag five years to finish this piece. It was about the carefree days of a child until tragedy darkened his life into nothing more than waking horror, but hope and love and peace claimed his heart in the end. 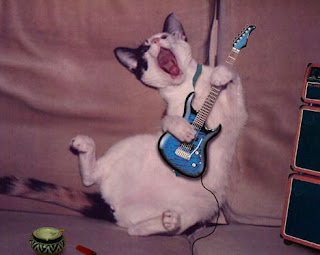 Yikes! I hope you enjoyed that. No one has set eyes on that but me, so you've just had a sneak peak!

(PS--please don't forget to enter my never-before-seen contest! It's not too late, you have until the 30th of January!)

*I've had to update this and say that not all rock stars are like that, but my MC is!
written by Elizabeth Mueller at 4:42 PM